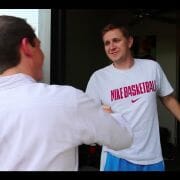 In Episode 4, Michael meets up with his client and former coworker Chris Wilson at his new construction single-family rental Uptown at Chestnut and Valence.  The guys discuss what separated New Orleans apart from the other cities he was considering moving to and why he chose Uptown over the CBD for his second New Orleans go-around.  Wilson trails off about Creole Creamery when asked about his workout regiment and Michael fails to “ice” Wilson.